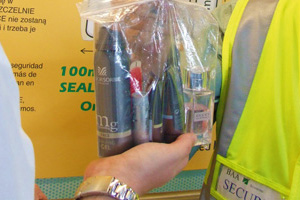 UK airport operators have supported the European Commission in postponing the relaxation of a ban on passengers taking liquids through security onto aircraft.

The Commission yesterday announced the postponement of the deadline of April 2013 for relaxing the current restrictions on the carriage of liquids, aerosols and gels by passengers, considering that a more realistic and progressive approach was necessary.

The Airport Operators Association called for the relaxation of the ban to be abandoned in May. It set out three tests which needed to be met before the ban was lifted:

· Does a partial lifting of the ban make things better for passengers?
· Does it make for better security?
· Can it be practically implemented by airports?

Chief executive Darren Caplan said: “The Airport Operators Association lobbied for the liquids ban not to be lifted next year and so we applaud the decision taken by the European Commission to take a more realistic and progressive approach.”

He added: “We do want to see progress being made and the ban eventually lifted, but only when the technology has matured, and a seamless, rather than a more confused, security process can be assured.

“At all times the security of passengers needs to take priority over arbitrary deadlines set by politicians.”

Caplan said:  “We are glad that the concerns of the AOA and our European trade association, Airports Council International Europe, have been listened to, and a decision taken this summer.

“We look forward to continue working constructively with the European Commission, the UK transport secretary – who has lobbied effectively in the counsels of Europe on this issue – and other stakeholders, ensuring any changes on liquids, aerosols and gels make things better for passengers, better for security and can be practically implemented by airports.

“We also look forward to working with manufacturers of liquids-detection equipment to deliver the technology which will lead to the eventual lifting of the ban.”