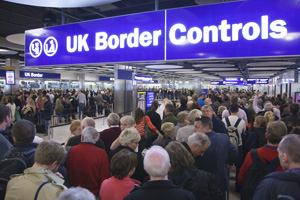 Almost 130,000 passengers will be disrupted in the busiest day in Heathrow’s history as border force staff walk out on strike next Thursday.

Up to 5,500 immigration officials are to strike on the eve of the London Olympic Games in a dispute about job cuts and pay.

Members of the Public and Commercial Services union plan to take further industrial action during the rest of the Games by refusing to work overtime.

Heathrow would normally expect up to 107,000 arriving passengers during the summer peak, compared with the 126,000 expected on Thursday.

Home secretary Theresa May condemned the strike as “shameful” and said: “They are holding a strike on what is one of the key days for people coming into this country for the Olympic Games.

“I believe it is not right for them to hold a strike. They will risk damaging people’s enjoyment of coming through into the UK.”

Contingency plans are being drawn up to draft in civil servants to man airport immigration desks.