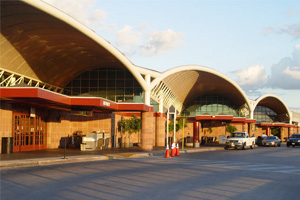 Flights were disrupted as a suspected bomb threat forced the evacuation of 2,000 passengers from San Antonio airport in Texas.

One flight was diverted, three cancelled, and 28 delayed as the airport was shut for several hours yesterday.

Services were suspended after the airport received a “very specific threat” by phone at 2pm local time.

Passengers were herded onto the runways, away from the airport buildings, before they were taken to a nearby high school while a security search was conducted.

Local news sources reported that dogs trained to detect bombs raised suspicions over three cars in an airport car park, indicating there could be explosives inside.

Airport officials confirmed that all three cars were eventually cleared, the BBC reported.