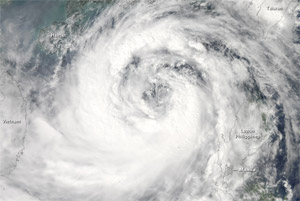 Typhoon Saola brought with it torrential rain and strong winds which triggered landslides and flooding.

Most domestic flights were cancelled, along with some international services.

Train services were stopped as the typhoon made its way up Taiwan’s less populated and mountainous east coast.

Taiwan’s National Fire Agency said one person had been killed in a landslide in the central region of Chiayi. Eight people were injured, most in falls from motorcycles, Reuters reported.

China’s meteorological agency issued typhoon warnings for the southern and eastern provinces of Fujian and Jiangsu as a separate system, Typhoon Damrey, is expected to pass north of China’s financial hub of Shanghai on Friday but will weaken to a tropical storm.