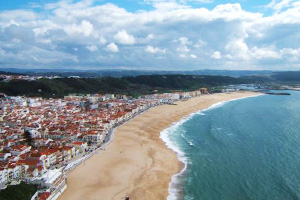 Two British holidaymakers, a five-year old girl and her grandfather, have drowned on a beach in Portugal.

The pair were on holiday with the girl’s parents and grandmother in the resort of Nazaré (pictured) on the Atlantic coast. They died yesterday afternoon after being dragged into the sea by a large wave.

The two had been strolling on the beach with the girl’s grandmother. Local fishermen pulled all three out of the water but only the woman survived.

No further details have been released, but the girl’s parents were reported to have been on the beach at the time.

There were also reports the three were strolling in an area of beach not monitored by lifeguards, along a coastline popular with surfers because of its waves.