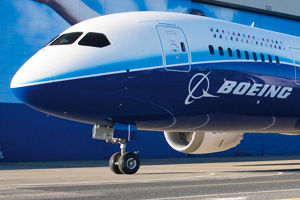 United Airlines will operate daily Boeing 787 flights from Heathrow for a period early next year.

Flights will operate to Houston for two months from February 5 to March 29, with United putting tickets on sale from tomorrow.

United expects to take delivery of its first 787 Dreamliner at the end of September, with four more to come by the end of the year.

The carrier, the biggest in the US, has already announced the start of 787 services between Denver and Tokyo Narita from March 31.

It will add 787 flights from Amsterdam to Houston, from December 5 to March 29, and fly Los Angeles-Tokyo and Houston-Lagos from early January, with Los Angeles-Shanghai and Denver-Tokyo beginning in late March.

United has 50 787s on order and will operate the aircraft year round on routes from London as more come into service.

The carrier flies twice a day between Heathrow and Houston.

A United spokesman said: “We have identified existing routes where the aircraft’s superior operating economics will be of most benefit in addition to new routes, such as Denver-Tokyo, which the 787 makes viable.

“While we wait for sufficient aircraft to be delivered to launch these operations we will deploy the 787 on key transatlantic routes on a temporary basis to demonstrate to customers the aircraft’s unique amenities.”

He added: “With so many 787s on order, United customers can expect to see the aircraft on existing and new routes around the world in the future.”