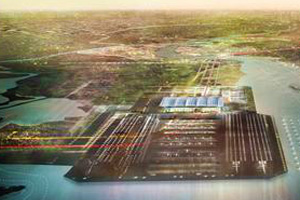 Architects behind a new airport on the Isle of Grain say the project would take seven years to build.

Norman Foster’s hub airport plan is one of three schemes which have been put forward for the Thames estuary.

Critics of the Thames airport proposals have said that building an airport in the estuary, off north Kent, could take decades.

But Huw Thomas, from Foster and Partners, said the time from starting work to opening would be seven years.

He said the key advantage to the site was that it could be reached from three sides by sea.

“In terms of doing the landfill, you’ve got easy access to the dredge sites that will provide the material – so you’re creating a greenfield site.

“Just think about what you’ve got to do at Heathrow.

The three plans to build airports in the Thames estuary comprise a floating airport designed by architects Gensier, another known as ‘Boris Island’ after it was backed by London mayor Boris Johnson, and proposals for a hub airport on the Isle of Grain designed by architect Norman Foster.

Proposals for increased airport capacity in the southeast have also included the expansion of Gatwick and Heathrow and more use of regional airports.