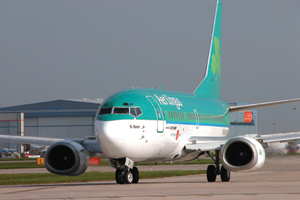 Ryanair remains determined to press ahead with its takeover bid for rival Aer Lingus in the face of a EU competition probe.

Chief exeuctive Michael O’Leary said he believed the remedies submitted to try to win clearance for the bid are “unprecedented”.

He said: “We believe this is the first EU airline merger where the remedies proposed delivers not one, but at least two up-front buyer remedies, and where all of the ‘merger to monopoly routes’ are remedied not just by passive slot divestments but by active up-front buyers and new market entrants.”

Speaking alongside the release of first half profits, O’Leary added: “Ryanair is determined to explore all commercial options to address any competition concerns the EU may have in order to secure approval for its proposed merger.

“The recent BA/Bmi merger approval and the subsequent Aegean/Olympic merger proposal vindicate Ryanair’s view that its offer for Aer Lingus along with the radical remedies package will – if fairly assessed – secure EU competition approval.”

He said consolidation is an “essential part” of making EU airlines more competitive.

It has already taken place in core EU countries via IAG (Iberia and Bmi merger), Air FranceKLM (including their investment in Alitalia) and Lufthansa (via takeovers of Austrian, Brussels Airlines and Swiss).

“That process is now spreading to peripheral countries as Aegean merges with Olympic in Greece, TAP is sold in Portugal and Ryanair bids again for Aer Lingus,” said O’Leary.