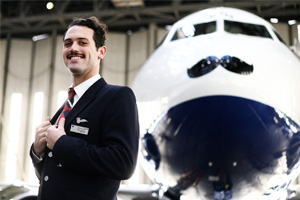 British Airways has decorated an aircraft with a moustache in support of Movember, the yearly campaign to raise awareness of prostate cancer.

The aircraft’s facial fuzz was unveiled by British Airways cabin crew Kyle Patchett (pictured), one of several colleagues showing his support for the cause throughout the month of November.

Men from across the airline grew moustaches last year to help raise more than £80,000 for the Prostate Cancer Charity. The campaign was spearheaded internally by BA chairman Sir Martin Broughton.

The airline is once again encouraging staff to join the campaign and is hosting road shows around the business to educate them on health issues.

Head of health services Liz Wilkinson said: “We’re always delighted to support Movember – it’s a charity that is very dear to our hearts here at British Airways, especially as our former chief executive Lord Marshall suffered from the disease.

“As well as raising money, the aim of the campaign is to raise awareness on the importance of early detection and prevention of the illness.”