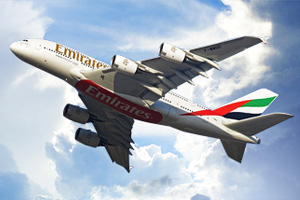 An engine problem forced an Emirates Airbus A380 superjumbo to return to Sydney just minutes after take-off on a flight to Dubai.

The A380 had reached 10,000 feet and had been flying for just 20 minutes when passengers said they heard a bang and felt the double-decker aircraft “judder”.

They then saw flames shooting several metres out of one of the engines, Sky News reported.

The airline said: “Emirates flight EK413 from Sydney to Dubai on 11 November turned back shortly after take-off due to an engine fault. Passengers are being rebooked on alternative flights.”

Emirates apologised for the inconvenience to its passengers, but said that safety was “of the highest priority and will not be compromised”.

A mid-air engine blowout in November 2010 on an A380 using Rolls Royce Trent engines prompted Qantas to ground its entire fleet of superjumbos for nearly a month.