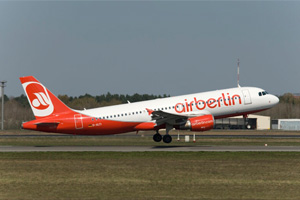 Air Berlin revealed plans for further cost-cutting against a backdrop of high fuel costs, aviation tax, the burden of the postponement of the opening of the new Berlin airport, a weakening euro and “dim” economic prospects.

Chief executive Hartmut Mehdorn said: “We have come to the conclusion that we need to implement an additional turn-around programme, ‘Turbine 2013’. With Turbine 2013 we concentrate fully on our core competences.

“Only in this manner will we be able to further improve our operating performance in this negative environment and to sustainably be in the black from next year onwards.

“The journey is not complete; however we are on the right track. Our target to return to profitability in the coming year remains unchanged.”

Germany’s second-largest airline is already looking for savings of €230 million this year through a ‘shape and size’ efficiency improvement scheme.

It made savings of €70 million in the third quarter despite fuel costs rising by €35 million.

Additional savings are expected as Air Berlin looks to sell off the majority of its Topbonus frequent flyer programme which has more than three million members.

Mehdorn said: “We have decided to migrate Topbonus into a new entity and sell the majority of it.

“This migration will further enhance the attractiveness for the program and its more than three million members and more than 120 partners.

“As an independent company focusing on this line of business, and having a clear expansion goal, Topbonus will be able to reach its full potential.”

Chief financial officer Ulf Hüttmeyer added: “The transaction will be concluded in the fourth quarter and will contribute to a significant improvement of the earnings and balance sheet ratios for the year 2012.”

Air Berlin’s strategic partnership with Etihad Airways struck a year ago has delivered €50 million in additional revenues and is offering a “wide range of cost savings opportunities”.