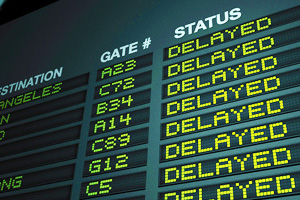 Airlines faced problems with fog at Heathrow and other London-area airports this morning while attempting to recover from yesterday’s general strike across Europe.

Hundreds of flights to and from striking nations were cancelled as well as services from the UK.

British Airways and easyJet were among the UK carriers forced to cancel some services to Spain, Portugal and Greece.

The European Trade Union Confederation co-ordinated the Europe-wide action which affected transport and public services. Some 40 groups from 23 countries were involved in demonstrations.

EasyJet said dense fog across the south of England was affecting visibility at Southend airport, resulting in delays.

Today’s situation was compounded by a strike by air traffic controllers affecting parts of east and southeast France.

EasyJet said: “This may affect flights operating through this region and delays can be expected. This is not affecting all French airspace and flights may be able to follow a different flight routing.”

However, Funchal airport in Madeira re-opened this morning after a fire services strike yesterday.