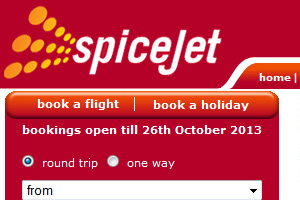 AirAsia has rejected speculation surrounding a possible expansion in India through the takeover of local budget airline SpiceJet.

A Reuters report had claimed that struggling carriers Jet Airways and SpiceJet are in talks with Etihad Airways and AirAsia respectively to sell minority stakes.

The report cited a senior government official with direct knowledge of the talks.

“AirAsia has not submitted a bid for the Indian budget carrier, and has no intention of doing so.”

Jet Airways shares rose about 14.3% and SpiceJet jumped as much as 19.2%, continuing rallies from last week amid speculation that they may become the first Indian carriers to secure foreign investment.

India changed its rules in September to allow outside carriers to buy stakes of up to 49% in local airlines, which have been hit by fierce competition and high operating costs.

A SpiceJet spokesman said: “In line with our internal policy to not comment on market rumors, we cannot confirm or deny any of the names which have appeared in the media from time to time.”

Speculation arose after an unnamed senior official at India’s civil aviation ministry was reported as saying Jet Airways and Etihad have been in talks for more than a month and a half or so.

He said a deal between Jet Airways and Etihad may happen before any possible partnership by SpiceJet.

The official said the alliance between Jet Airways, India’s biggest carrier by market share, and Etihad “will be more than a stake sale or cash infusion.”

Jet Airways said it did not want to comment on “speculative reports.” A spokesman for Etihad declined to comment.