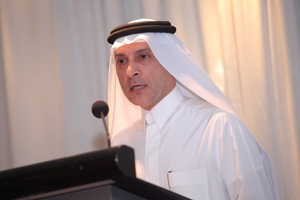 Qatar Airways boss Akbar Al Baker hit out at aircraft manufacturer Boeing after successfully launching a Dreamliner service to and from Heathrow yesterday.

Al Baker flew into Heathrow on Qatar Airways’ inaugural Boeing 787 service from Doha on Thursday and said: “Boeing has to get its act together very fast. We won’t accept any more defects.”

The carrier was forced to ground the most-recently delivered of its three 787s on Sunday following a problem with the aircraft’s electrical power generation.

This followed the grounding last week of a United Airlines 787 with the same problem.

The United Airlines Dreamliner was forced to make an emergency landing at New Orleans on December 4 after one of six electric generators failed. The problem was initially believed to be confined to that single aircraft.

However, Al Baker confirmed: “One of our three 787s has the same problem as the United Airlines aircraft.

“We have grounded our number three aircraft since December 9 [Sunday].” He said the aircraft was likely to remain grounded until the weekend.

The problems came as the US Federal Aviation Administration ordered mandatory checks on the fuel-line connections of all Dreamliners following the discovery of fuel leaks on 787s belonging to other airlines.

Al Baker said: “We did not have a fuel problem. We have electrical problems.”

Asked if the issues could be described as “teething problems”, he said: “Two aircraft having the same major problem so quickly is a concern. We are not buying aircraft for a museum. We buy them to fly.”

He described himself as “happy with Boeing’s reaction”, but insisted: “We will seek compensation. It is not excusable when a programme has been delayed three years and an aircraft has been flying 14 months.”

Al Baker added: “Boeing knows we are serious. We have told them these kinds of problems are unacceptable. We are falling behind on our expansion programme.”

Qatar Airways is due to take delivery of a further two 787s before Christmas.

The carrier began daily Dreamliner services between Heathrow and Doha on Thursday, departing London at 15:05 – one of five daily services to its Doha hub.