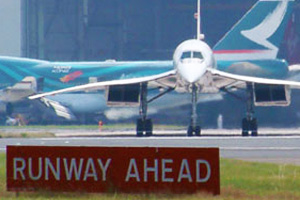 UK business leaders are backing calls for expansion at Heathrow through the construction of two new runways.

A poll of more than 1,000 members of the Institute of Directors found the airport’s expansion to be the most popular solution to the UK’s hub capacity squeeze.

More than a quarter (27%) supported a third runway at Heathrow as the solution that would most benefit their businesses, while 13% backed a new hub in the Thames estuary.

The IoD report also calls for a freeze in Air Passenger Duty plus more immigration staff at airports and UK visa changes.

The group is one of the first major business organisations to openly back a four-runway hub at Heathrow.

It is also pushing for expansion at Gatwick to meet demand from passengers in the southeast over the next three decades.

But it warns a second runway at Gatwick or any other London airport would be “insufficient” on its own to solve the UK’s imminent aviation crisis.

Government figures show that London and the southeast are facing an aviation capacity shortfall of 16 million in 2030 and 57 million in 2040.

The IoD says most of the increased demand will be for flights from Heathrow.

The report says: “Only a new hub airport or a four-runway Heathrow are sufficient to meet the shortfall.

“A combination of a third runway at Heathrow and a second runway at Gatwick or Stansted would be sufficient to meet the overall capacity shortfall, but may not provide enough additional hub capacity.”

Corin Taylor, senior economic adviser at the IoD and author of the 104-page report, said expansion at Stansted “would risk being a very poor investment” given its location and the fact that it is currently only about half full with a single runway.

A Thames estuary airport could only be financed if Heathrow was shut down, he told the Daily Telegraph.

Amsterdam’s Schiphol airport has replaced Heathrow for many IoD members as the main hub for connecting to flights taking them elsewhere in Europe.

“In effect we have outsourced our hub to Amsterdam’s Schiphol airport,” the report states.

In northeast England, 42% of IoD members said they flew to Amsterdam to transfer to other flights taking them to European destinations, compared with 11% saying they would connect at Heathrow.

Almost 59% of IoD members agreed that Heathrow’s lack of capacity had a damaging effect on Britain’s ability to secure inward investment.

Concerns about noise if Heathrow builds two new runways can be addressed by prohibiting older, noisier aircraft, according to the report.

There was also an increasing recognition of the need for the UK to improve its connections to emerging markets.