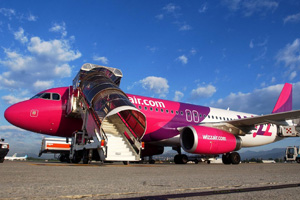 Eastern European low cost carrier Wizzair aims to more than double its traffic to 25 million passengers a year by 2020.

Founder and chief executive József Váradi outlined the Hungarian carrier’s growth plans in an interview with the Financial Times today.

He said he expected passenger volumes to grow by about 10% a year over the next decade – a higher rate than those of rivals such as Ryanair and easyJet.

Wizzair flew 12 million passengers in the past 12 months, putting it among the top five European budget carriers by passenger numbers and helping it turn a profit of €43 million in the year to March 31, on sales of €766 million.

Váradi said: “The ability of the industry to stimulate new traffic has become constrained but the low-cost sector can still grow at the expense of the established traditional carriers.

“I think the kind of growth we are achieving today, even under tough conditions, can be delivered.”

He added: “We designed our business model to remain effective no matter what and no matter who we have to compete with.”

Váradi admitted the growth ambitions would probably require a public offering of privately held Wizzair. However, he said that the airline’s current backers, dominated by German transport-focused bank DNV, were happy to wait for better market conditions.