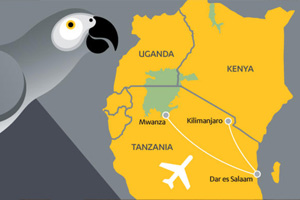 African budget carrier Fastjet has raised more than £1 million through a share issue.

Funds will be used for general working capital and expansion of the network in Africa, the airline said.

Fastjet announced plans last month to move into South Africa from its Tanzania base with the takeover of Johannesburg-based airline 1time, which went into liquidation in November.

Fastjet was created with involvement from easyJet founder Sir Stelios Haji-Ioannou, who holds a 5% stake.

Commenting on the fledgling carrier’s December statistics, chief executive Ed Winter said: “To have achieved a 78.9% load factor and carry almost 30,000 passengers is a fantastic result for the first month of Fastjet operations and clearly demonstrates the latent demand for low cost reliable air travel in Africa.

“Press concerns over infrastructure have proved unfounded with no scheduled Fastjet flights cancelled and 99.6 % arriving within 15 minutes of schedule. “