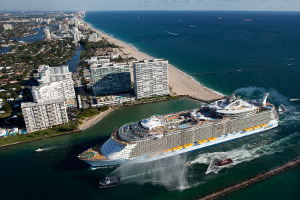 Is the introduction of bigger ships into the market a sign of cruise lines’ optimism or a shrewd business move? Melanie Hall reports

“If you build it, they will come”, the approach Kevin Costner famously took in the movie Field of Dreams, appears to be one shared by cruise lines as their strategy of launching new mega-ships continues apace.

Royal Caribbean Cruises confirmed an order last month for a third 5,400-passenger  Oasis-class ship to enter service in 2016, while Norwegian Cruise Line will add two 4,200-passenger vessels from 2015, following the launches of the smaller Norwegian Breakaway and Norwegian Getaway this year and in 2014.

Princess Cruises’ 3,600-capacity Royal Princess will be named in June this year in Southampton and a ship in the same new class is being delivered to P&O Cruises next year.

With this flurry of vast ships entering the market, how can cruise lines expand their customer base?

One strategy appears to be emulating how cruise was successfully grown in the US: operating taster cruises.

A number of companies, including P&O Cruises and Silversea, are now offering these short sailings from UK ports.

“They are useful for getting people to bring their friends along to sample cruising.”

Although short cruises from the UK don’t have the benefit of the warm weather passengers enjoy on US cruises, Tom Costley, group director at research firm TNS, said destinations  are not necessarily  the point but rather  the ship itself.

“It probably doesn’t matter where it’s going,” he said. “They are trying to sell the service levels, the luxury cabins, and so on.”

Celebrity performers are proving a big draw with customers and P&O Cruises has lined up tenor Russell Watson for two departures this year as well as Britain’s Got Talent 2012 runners-up Jonathan and Charlotte.

So what is driving cruise lines to order these vast ships in a difficult market?

“The ships are so big because oil prices are high now compared to where they were 10 to 15 years ago, so one way to deal with that is to put more passengers on a ship and spread the cost across more people,” said Harry Stoakes, assistant director of leisure-specialist accountants BDO.

“Also, the big cruise lines need to put out new ships to be seen to be keeping up with modern ship developments as well as serving consumers’ changing tastes,” added Stoakes.

“You have to put it in perspective,” said Lingard. “There’s been a flurry of orders but in global terms, only 3% capacity per annum has been added. The cruise industry isn’t growing that fast.

“We have noticed it in Britain because several of the ships are based here. It looks a lot, but these ships can be dissipated  over the entire planet.”

Finding customers to fill all the new cabins coming on stream remains important for cruise lines whose business models continue to be based on sailing full.

So much is dependent on this from the logistics of pre-ordering provisions to paying the crew, whose earnings are dependent on the level of gratuities paid by the guests they serve.

Stoakes said operators will look to where the growth is with Europe still expanding but markets such as Australia and Asia are coming up on the rails.

“Once the Chinese get used to cruising, the market will go bonkers,” he said. “You can always move the ships from Europe. It won’t be a case of cruise lines not being able to fill ships.”

Having more ships will, therefore, not have a significant impact on pricing, says Stoakes.

“Prices will remain where they are now,” he says. “Cruises will always be discounted because for the cruise lines’ business model to work, they need a certain level of capacity to be filled. A few more ships is not going to change that.”