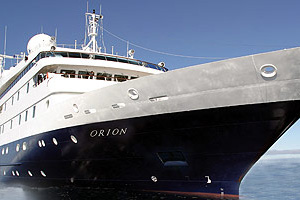 Expedition cruise ship Orion rescued a sailor who spent three days adrift in a life-raft in the Southern Ocean off the coast of Tasmania.

The ship was 12 days into an 18-day Antarctic cruise with 100 passengers on board when it was asked by the Australian authorities to rescue the yachtsman as his location was too remote for a helicopter rescue.

Orion was reported to be on its way back from the Antarctic when it answered the distress call, making a 50-hour diversion to pick him up.

The yachtsman was attempting a solo round-the-world voyage when he ran into trouble on Friday, 500 nautical miles off Australia’s island state.

The mast on his yacht broke in rough weather forcing him to abandon it.