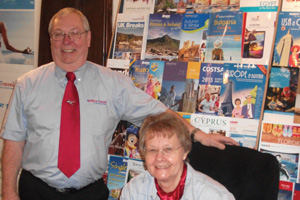 Richard Abery isn’t one to let a minor issue such as age get in the way of setting up a travel agency.

While his peers contemplated retirement, Richard, now 63, opened Spitfire Travel in May 2010 with partner Anne Butler, a former maths teacher.

And while most start-ups steer clear of the high street, Richard took the unusual step of moving his homeworking operation from an office in an industrial warehouse on the outskirts of Shefford in Bedfordshire to the town’s high street at the end of last year.

“It’s the best thing I’ve ever done,” says Richard, who has spent most of his life working in the coach sector as everything from mechanic to tour guide.

It was during a stint as a delivery driver for one of the major supermarkets that the idea to become an agent took hold.

He recalls: “I got involved in the supermarket’s social club and organised trips. I realised I was doing it and not getting paid. So in 2007, I set up Spitfiretravel.com so I could put a percentage on top as my earnings.”

Richard was soon organising 36 group outings and trips a year for the company’s staff nationwide.

His partner Anne persuaded him to apply to become a Global Travel Group member and, with the help of a friend, they secured an office in an industrial warehouse.

“All our work was on email or over the phone but there was only one way for us to take the business further, and that was to get high street premises.

“The decision was frightening, especially when we put figures down on paper. But so far we have completed at least one sale a day.”