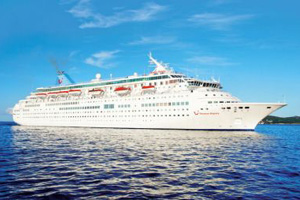 Five crew members have died on a Thomson Cruises ship during a safety drill.

They were on a lifeboat which is understood to have fallen down from the Thomson Majesty. Three other crew members were injured.

The incident occurred at Santa Cruz de la Palma in the Canary Islands. No passengers were affected

Sunday’s accident came 13 months after the Costa Concordia disaster in which 32 people died when the ship ran aground of the Italian island of Giglio. Some of the criticism following the Concordia disaster focused on safety drills and the crew’s response to the situation.

The incident on Thomson Majesty occurred when the crew were practising the emergency deployment of lifeboats in order to ensure a safe evacuation were the order given to abandon ship.

A spokesman for seafarers union Nautilus International said lifeboat drills had a prior record of being notoriously dangerous.

Andrew Linington told the Daily Telegraph: “We’ve had this happen so often and the industry has moved lamentably slowly to deal with the problem.

“There’s been research which suggests that more people are dying in lifeboat drills than are being saved by lifeboats. It’s that serious.

“The death toll has been such that we advise our members: if you’re doing a drill the drill is about raising and lowering the lifeboats. It shouldn’t be about people actually getting into them. We advise them to do it without people in the lifeboats.”

In its latest statement yesterday the cruise line said: “Thomson Cruises can confirm there was an incident involving the ship’s crew during a safety drill on board Thomson Majesty, in La Palma, Canary Islands at 11:50am local time.

“We can also confirm that there have sadly been five crew fatalities and three crew injuries. One person has been discharged from hospital and we expect the other two people to be released from hospital imminently. Our thoughts are with the families of those involved.