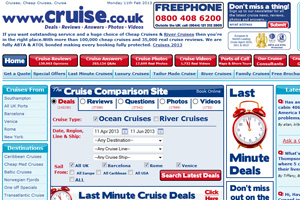 The UK’s leading cruise portal, cruise.co.uk, is to start a global roll-out of its review sites this year.

Starting in Ireland in two months’ time, the online publisher and retailer of cruise deals will then expand into Australia, South Africa, America and Continental Europe.

Managing director Seamus Conlon said: “We’ll be rolling out all our technology and all the content that we’ve gathered over the last five years in the UK and we’ll be putting into these different markets. It will still be relevant.

We will have customers reading Royal Caribbean Cruise reviews in Australia predominantly written by people from the UK market but at the same time we’ll start developing and adding all the user-generated content from those markets as well.

Cruise.co.uk already has over 150,000 pages of user generated cruise content.

“The visitors to our site create the most interesting stories, descriptions of their cruise experiences; they are huge advocates of cruising, but they also say it as it really is.”

“The faster we grow all these international markets, the quicker it will drive even more traffic into the UK sites. We’ll do something similar with the whole forum type of content for each of the new markets as well. It’s so popular in the UK,” he said.

Conlon said he would also extend ‘Myrtle’, cruise.co.uk’s new enhanced CRM database initiative, which was launched in the UK last year and is now starting to change the firm’s marketing and customer engagement practices, into all its new international markets in 2014 as well.

Commenting on Myrtle, he said: “It’s now a key operational workflow tool used by our consultants. We monitor in detail what the visitors on our site have looked at over the past five years and now we have a great understanding of what people with a particular cruise history or search history may be interested in the future.

“Interestingly we have found that more and more people are less loyal to any one cruise brand, but we don’t believe this is due to any form of dissatisfaction, it is just that people want new experiences, new standards and new destinations.

“If you can only go on holiday in August and your previous cruise line only does a certain type of cruise in August, then you need to look at other brands.”

He explained that the Myrtle system was available to view by all sales consultants and said this year would see customers and potential customers getting individual bespoke email communications containing offers targeted specifically only for them based on their profile that cruise.co.uk has captured.

“This will be the key focus for us as we move over the next year and we’ll also be moving this concept out into international markets next year.”

Cruises.co.uk (the separate forum site) has 62,292 members, has received 473,831 posts and at some stage in the future this too will be opened up to international visitors, although this separate site will always be primarily be aimed at British cruisers.