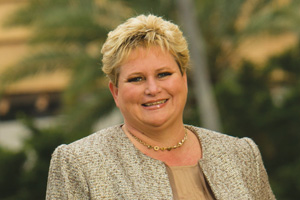 When Marie Rayner applied to become a Travel Weekly 2013 Cover Star, she asked a friend to help her canvas votes.

But this wasn’t any old friend. It was popstar and song writer Chesney Hawkes. Yes, the one and only, if you’ll forgive the pun.

“He said he’d put it on his website. I’m not sure if it helped but when Travel Weekly rang me to say I was one of the Cover Stars I was so excited I cried!” said Marie, whose daughters Amber and Jazmin went to school with Chesney’s children.

Marie now counts Chesney as one of her good friends and regularly books flights for him from his Los Angeles home to concert venues. She is even listed on Chesney’s official website as the “best travel agent in Surrey” and he recently sang at her 50th birthday party.

Not bad for someone who started on the foreign exchange counter of Going Places 12 years ago after a varied career, including accounting roles and a stint as a special constable.

“One day at Going Places they asked if I could sit on the sales counter and that was it,” she recalled. “I have done so many things in my life and I just fell into travel.”

The chance to go to Florida on the Cover Stars trip meant more to her than most. It was the destination of her first holiday with her husband-to-be 15 years ago, where she fufiled her dream of swimming with dolphins.

“The dolphins all swam round me and followed me and they even asked if I was pregnant because the dolphins were acting weirdly,” said Marie.

Shortly after the trip Marie discovered she was in fact pregnant with her first daughter Amber, now 14.

Her return trip to Florida as a Travel Weekly Cover Star more than fufiled her expectations.

“So much had changed. There are so many rides now at Universal and the Premium Outlets shops were amazing,” said Marie. “I hadn’t been for eight years and I just loved it.”

Marie’s experience of Universal Orland Resort was made all the better thanks to a VIP tour of the resort.

Not only did it mean she could avoid queuing for the rides, she also gained a greater knowledge of the resort’s history thanks to an experience tour guide.

“The tour guide was amazing and she explained all the rides to us. I will recommend it to clients as it means you can avoid the queues,” said Marie.

Among her favourite parts of the resort were The Wizarding World of Harry Potter at Universal’s Islands of Adventure. “Once you are in you would never know you are at Universal and if you stay at one of the Universal hotels you can get early entry to the parks,” added Marie.

“The huge drop at the end was amazing. It’s nice to have a ride with a story attached to it,” she said.

Marie loved the resort despite having to avoid the rollercoasters due to a pre-existing medical condition. Marie has benign intercranial hypertension which involved having brain surgery in 2005.

The diagnosis caused her rethink her life and ultimately led her to become a Travel Counsellor. “It made me think life is too short and to do something for me,” she said. “And I’ve not looked back since.”