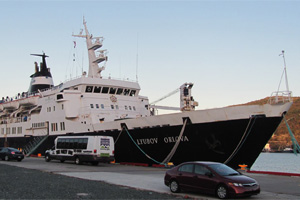 A cruise ship that went missing in January has been spotted floating toward the coast of Ireland.

Lyubov Orlova was on its way to the scrapyard when it broke away from a Canadian tug in international waters last month, not to be seen again until it was spotted late last week.

It had been drifting across the northern Atlantic and is now reportedly within 1,200 nautical miles of the Irish coast, Gadling reported.

The Russian-built cruise liner was seized in St John’s, Newfoundland, in 2010 because its owners were $250,000 in debt and the crew hadn’t been paid in over five months.

Last February, the ship was bought by Neptune International Shipping, according to Gadling, and was scheduled to be scrapped in the Dominican Republic.

It was heading to the scrapyard when the ship broke free from the tug pulling it, and when the crew failed to recapture it due to high winds and choppy seas, the vessel was left to drift across the open ocean.

Canadian authorities refused to mount a salvage operation because the vessel was adrift in international waters.

The current owner of the vessel, Reza Shoeybi, is now trying to reclaim the ship, reported Gadling, who said he is working with salvage companies in Ireland to attempt to retrieve the vessel.