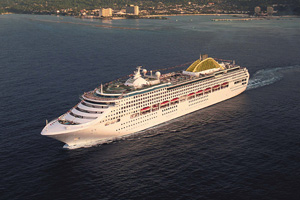 Two passengers on a world cruise have been shot in a daylight robbery during a call in Barbados.

The shooting occurred on Sunday afternoon as the pair – a man aged 72 and a 59-year-old woman – were hit during a call into Bridgetown by the P&O Cruises ship Adonia.

It is thought the woman was shot in her right thigh and the man was hit in his left side.

The married couple’s injuries are not believed to be life-threatening but both were admitted to hospital. Their relatives have been informed.

A Royal Barbados Police spokesman told the Daily Mail that the attacker stole the woman’s handbag and fled.

“It appears the incident was a robbery, the female’s handbag was stolen,” the spokesman said. “Two British tourists, a couple, received gunshot wounds.”

They were on an 85-night world cruise which left Southampton on January 8 and is due to return on April 3.

A P&O Cruises spokeswoman said: “Two passengers on Adonia have been hospitalised in Bridgetown, Barbados, following an incident on shore.

A Barbados tourism authority spokeswoman said: “We are extremely sad to hear about this.

“Instances of this nature are thankfully extremely rare in Barbados where security and safety is still one of the things we consider to be our main USP.

“We are working closely with the police to get to the bottom of what happened but we can offer reassurances that Barbados remains a safe place for locals and visitors.”