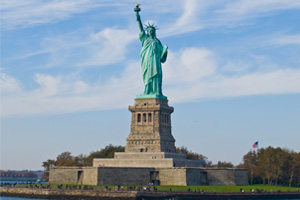 The Statue of Liberty is to reopen to visitors by July 4 after repairs to extensive damage to Liberty Island caused by Hurricane Sandy.

US interior secretary Ken Salazar, announcing the Independence Day reopening, said: “Hurricane Sandy inflicted major damage on facilities that support the Statue of Liberty – destroying the docks, crippling the energy infrastructure on Ellis Island and wiping out the security screening system – but we are fully committed to reopening this crown jewel as soon as it’s safe for visitors and not a second later.

“Based on the tremendous progress we have made, Lady Liberty will be open to the public in time for the July 4th celebration.”

Repairs to the docks needed to transport visitors to Liberty Island are being funded by the US Department of Transportation’s federal lands highways programme, as part of $28 million being spent on roads and bridges in federal parks and recreation areas in New York and New Jersey damaged by Hurricane Sandy.

Salazar highlighted the importance of reopening the statue to the New York economy. An annual report released last month by the National Park Service showed that 3.7 million people visited the park in 2011, generating $174 million in economic activity and supporting 2,218 jobs.