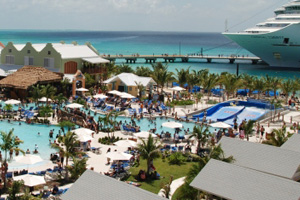 The cruise terminal on Grand Turk in the Turks & Caicos Islands has been shut down following a stomach bug outbreak.

The tourist board did not say why or when the 18-acre cruise centre closed, but board director Ralph Higgs reportedly said local authorities were addressing the problem and hoped to reopen the terminal soon.

Queries about the problem were being referred to Carnival Cruise Lines, which opened the terminal in 2006.

A spokesman said the company was “investigating whether there may be a link with consumption of food and beverages while guests were ashore in Grand Turk”.

He said Carnival and other cruise lines cancelled port calls to Grand Turk to be cautious and were monitoring the situation while authorities try to determine the cause of the illness.

Cruise lines re-routed their ships or extended their stays in ports in Puerto Rico, Bahamas and other destinations in the Caribbean.

A Florida-based spokesman for the cruise centre said experts, working with local health officials, had been examining and testing food and water at the cruise terminal over the last two weeks.

“Multiple measures are currently being taken to ensure the quality of all food, water and sanitation systems going forward,” he said.