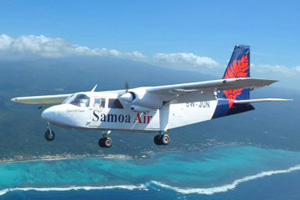 A “pay only for what you weigh” initiative has been introduced by Pacific carrier Samoa Air.

The airline is calculating the cost of the ticket based on both the weight of passengers and their baggage.

Passengers pay a fixed price per kilogram, which varies according to the length of the route.

He told ABC News: “People have always travelled on the basis of their seat but, as many airline operators know, airlines don’t run on seats; they run on weight and particularly the smaller the aircraft you are in the less variance you can accept in terms of the difference in weight between passengers.

“There is no doubt in my mind that this is the concept of the future because anybody who travels has travelled at times when they feel like they have been paying for half of the passenger next to them.

“People are generally a little bit bigger, wider and taller than they were 40-50 years ago.”

He said families had been “pleasantly surprised” by the pricing policy, introduced in January, as they could end up paying less because children were also charged by weight and not on their seat.”

Rates range from $1 a kilogram for the weight of the traveller and their baggage on the airline’s shortest domestic route to about $4.16 per kilogram for travel from Samoa to neighbouring American Samoa.

The airline’s website says: “We at Samoa Air are keeping air fares fair by charging our passengers only for what they weigh.

“You are the master of your air ‘fair’, you decide how much (or little) your ticket will cost. No more exorbitant excess baggage fees, or being charged for baggage you may not carry.

“Your weight plus your baggage items, is what you pay for. Simple.”