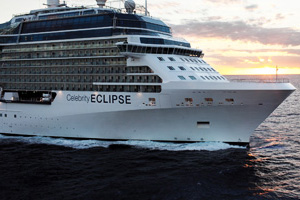 Passengers on Celebrity Eclipse were robbed by three masked gunmen while on a tour bus in St Lucia.

According to reports, the gunmen boarded the bus during an excursion to the Botantical Gardens in Soufriere on Friday.

No-one was hurt but jewellery and money are reported to have been stolen. Two crew members were with the 55-strong group, which included ten British people.

Tourism minister Lorne Theophilus said it was an “unfortunate and a horrible scenario”.

Matthew Beaubrun, chairman of the St Lucia Tourist Board told DBS: “This is a rare incident …This is such an important industry for us that we need to respond.

“We have taken it very seriously at the highest level and I know the minister’s been in touch with the prime minister, so we are not taking this thing lightly.”

A statement from Celebrity Cruises said: “No one was injured in the robbery and the guests returned to the ship unharmed.

“We are thankful that none of our guests were injured in this unfortunate event, and will continue to provide them any support they may need.

“A vacation is supposed to be filled with fun, rejuvenation and relaxation. An act of crime should not be part of any vacation, and we regret our guests had to experience those events.”