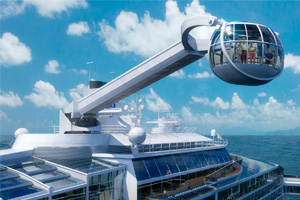 Two cruise industry “firsts” have been claimed by Royal Caribbean International as details of its new Quantum class of ships were revealed.

The RipCord by iFly is described as the first skydiving experience at sea, allowing people to enjoy the “sheer thrill and exhilaration” of skydiving in a safe, controlled, and simulated environment.

This is coupled with North Star, a jewel-shaped glass capsule, which transports passengers more than 300ft above the ocean and over the sides of the ship to deliver 360-degree views.

The line is claiming the largest indoor sports and entertainment complex at sea – featuring bumper cars and roller skating – and the company’s largest cabins include “virtual balconies” for inside accommodation, giving real-time views of the ocean and destinations.

New studio cabins for solo passengers, some with balconies, will feature on the new category of 4,180-passenger ship together with three levels of junior suites and larger loft suites.

Other new features include Two70°, a multi-level entertainment room with 270-degree panoramic sea views through floor-to-ceiling glass walls spanning almost three decks at the stern of the ship.

Sporting and entertainment venue SeaPlex is described as the largest indoor active space at sea, featuring a circus school with flying trapeze and a full-size basketball court. Bumper cars and roller skating will be offered at night together with a dancefloor with a ‘floating’ DJ booth hovering above.

Live music, DJs, theme night parties and billiards will feature in the two-storey Music Hall, with a design inspired by the spirit of rock and roll, according to the company.

An adults-only Solarium, along with an outdoor pool, a new indoor pool with retractable roof and a H2O Zone kids’ aqua park, will be featured on the top deck.

Additional details about dining, entertainment and other “unexpected features” and amenities on Quantum of the Seas will be unveiled in the coming months, the line said.

Royal Caribbean Cruises chairman and chief executive Richard Fain said: “This new generation of ships gave us an opportunity to make another leap in vessel design. Innovation has always been part of our DNA and we have taken advantage of all that creativity to design Quantum cruising.

“The unique features on Quantum will boggle our guests’ minds, but the real strength of the design is how our people have integrated all these diverse components to create a comfortable and exciting experience.”

Royal Caribbean International president and chief executive Adam Goldstein added: “We are excited to be introducing major advancements in ship design and offerings on Quantum of the Seas and Anthem of the Seas.

“The innovative spirit of our brand is alive and well, and with Quantum class we will deliver more unexpected activities in the most extraordinary spaces. Our guests should prepare to be wowed.”

The details were unveiled by US stage, television and film star, Kristin Chenoweth – godmother of Quantum of the Seas – in New York City.