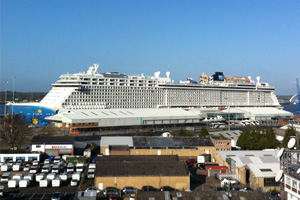 Norwegian Breakaway becomes one of the biggest ships to make its debut in Southampton today for a special trade preview.

The latest Norwegian Cruise Line ship made a pre-inaugural overnight sailing from Rotterdam to arrive in the UK port this morning.

Hundreds of agents will be on board as the 4,028-passenger ship is showcased today by senior executives led by chief executive Kevin Sheehan.

They will be able to earn up to 4% bonus commission for their agencies by attending educational sessions onboard.

Norwegian believes the Engage and Reward initiative on board new ship Norwegian Breakaway is a first for the travel industry.

Agents will be given a unique barcode on arrival, which they will have scanned as they attend ship tours and presentations from senior managers, Ace and Travel Weekly among others.

The maximum bonus commission they can earn is 4%, which will be available to all staff in their agencies between May 15 and June 14 for sailings before the end of 2013.

Agents are being given the opportunity to meet representatives from key cruise destinations as they move through check-in and embarkation at Southampton.

Norwegian is also providing £25 bonus commission on new bookings made by May 14 as part of promotional campaign involving price cuts of up to £150 per cabin across various ships in the fleet.

UK & Ireland business development director Nick Wilkinson said: “Our Partners First philosophy recognises the central part that the trade plays in product distribution, and the Engage & Reward programme idea is rooted in that.

“Attending agents will have the opportunity to earn incremental commission for their organisation through attending the various educational elements of the launch activity.”

Norwegian Breakaway leaves tomorrow for its homeport of New York where it will be officially named on May 8. Summer cruises to Bermuda start two days later.

The vessel will be joined in April 2014 by sister ship Norwegian Getaway.