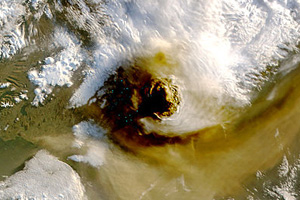 EasyJet is to recreate a volcanic ash cloud to test out special equipment designed to avoid the disruption caused by the Icelandic eruption in 2010.

The airline has flown back a tonne of volcanic ash from Iceland collected by the Institute of Earth Sciences in Reykjavik.

The ash, dried to create the consistency of fine talc, will be used in a an experiment which is planned for this summer.

The next phase of testing will involve two Airbus test aircraft, one of which has the ability to disperse the ash into the atmosphere, thereby creating an artificial ash cloud for the second with the ‘AVOID’ technology fitted to detect and avoid at over 30,000ft.

The experiment, which is expected to be conducted in August, will take place when two satellites are aligned to be able to image the ash cloud from space, thereby helping to prove the accuracy and effectiveness of the technology, according to the carrier.

The AVOID system can be likened to a ‘weather radar’ for ash. The system comprises of infrared technology developed by the US military fitted to aircraft to supply images to pilots and an airline’s operations control centre.

The images enable pilots to see an ash cloud, up to 100 km ahead of the aircraft and at altitudes between 5,000ft and 50,000ft, thus allowing them to make small adjustments to the flight path to avoid it.

EasyJet engineering director Ian Davies said: “The threat from Icelandic volcanoes continues and so finalising the approval of the AVOID technology is as crucial now as ever to ensure we never again see the scenes of spring 2010 when all flying ceased for several days.

“Transporting a tonne of volcanic ash from Iceland is an important step in the final journey of testing the technology and moving towards commercial certification.”

Airbus senior flight test engineer Manfred Birnfeld said: “We are all working towards reducing the impact of volcanic ash clouds, and the technology being developed in AVOID could prove valuable in identifying airspace free of ash contamination and provide data for pilots and airlines on the precise localisation of ash clouds.

“This is why Airbus is supporting the development of AVOID and we hope this system will contribute towards three dimensional, dynamic mapping tools to allow the airlines to take necessary decisions for a safe flight under the full knowledge of current location of ash clouds.