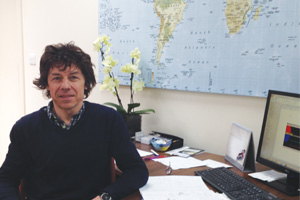 One of Julian Abbott’s mantras is to treat all customers the same, whether they spend £10 or £1,000.

So when the Abbotts Travel owner decided on a major refurbishment of his travel agency in South Woodford – its first in more than 20 years – it was important the shop was still just as welcoming to every type of client.

“I didn’t want to scare away the cheaper end of the market,” admits Julian, who has worked at the family business since he was 19. “We embrace any business and we treat everyone the same.”

Despite the new, modern feel of the agency – gone are the old-fashioned window cards, and customers can now watch holiday promotions on a high-definition screen in the reception lounge – the staff and ethos are the same.

“Our old-school clients would have continued to come in but we are now attracting new clients,” adds Julian, whose grandfather started the business in 1957 selling mainly rail and theatre tickets.

The agency is no longer double-fronted – Julian now leases the next door area to Costa Coffee – but has been extended at the back to store brochures and create staffroom, kitchen and office areas.

The facelift of one of South Woodford’s oldest businesses, which includes a zigzag counter and large photograph murals depicting its new ‘people, places, pleasure’ strapline, means it is more amenable to hosting events such as supplier training and customer presentations.

But it is not just the look and feel that has changed – the agency is now interacting with customers in new ways.

The website has been revamped to create a more personal feel, and the agency communicates with clients using Twitter and via its Facebook page. Customers are being encouraged to blog about their trips.

The agency hopes to take this idea one step further by using customers’ photos for its ‘people, places and pleasure’ themed murals.

“We blew up the photos as wallpaper murals to go behind the counter and perhaps when we change them we  could get clients to send in their pictures,” says Julian.