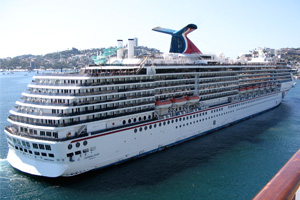 A couple who went overboard from a cruise ship off the coast of Australia on May 8 had been arguing before the fall, a senior police source told the Associated Australian Press.

The incident occurred on the Carnival Spirit as it sailed along the mid-north coast of New South Wales.

CCTV captured Paul Rossington and Kristen Schroder in the ship’s casino on Wednesday evening having a heated argument, which led them to skip dinner with Ms. Schroder’s family.

Later footage shows the pair ‘mucking around’ in the ship’s corridor, apparently no longer arguing. The couple then head to the deck of the ship where Ms. Schroder can be seen climbing over the Spirit’s railing, facing the sea.

Around 8.50pm, the footage shows the couple going overboard into the Tasman Sea, one immediately after the other. Police have been unable to determine whether Ms. Schroder jumped or fell, but Mr. Rossington can be seen jumping overboard moments later.

The search for the pair was called off last Friday afternoon after police had searched 500 square nautical miles off the coast of Forster, NSW.

Carnival Australia has defended the company’s safety standards, saying rails on the ship are higher than required by international regulations.