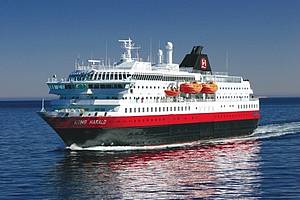 Hurtigruten is looking to expand its exploration cruise offerings, with its chief executive describing the sector as “the sweet spot of the cruise industry”.

Daniel Skjeldam told agents at the Clia Selling Cruise Convention that he believed cruise growth would be far greater than the growth of trips to destinations such as Rome and Barcelona because customers have a desire to be unique and do something different.

He said he was looking at the possibilities of expanding the exploration cruise line, in particular in Greenland and Spitsbergen.

He also said the line would not enter into “price wars” with other lines because the differences between a 400 berth ship and a 4,000 passenger vessel were vast.

He added: “We believe exploration cruises – we believe Hurtigruten – is at the sweet spot of the cruise industry at the moment.

“We will continue to grow because it is about growth. It is about changing to the customers future needs. “

Those cost cutting measures had already been implemented by consolidating two offices in Norway into one head office.

Kathryn Beadle, the line’s managing director, said the line was proving successful in the UK and because of that, they were currently looking to take on new positions in their London office’s product team.

Skjeldam told agents the key selling point for their voyages was the “unique experience” to be gained. He said he accepted customers would have to pay more for the experience but that it was also great value.

He also explained his reasons for leaving low cost budget airline Norwegian for Hurtigruten and said he enjoyed selling a product which takes passengers on a “unique exploration”.

He said: ” For me it’s about selling a real product, selling something that could make a difference to people.”