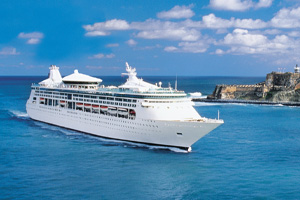 At least one future cruise has been cancelled following a fire on a Royal Caribbean International ship sailing from the US.

The blaze broke out on Grandeur of the Seas, which has only just been refurbished, in the early hours of yesterday morning and took about two hours to extinguish.

All 2,224 passengers and 796 crew were accounted for but the ship was forced to divert to Freeport in the Bahamas.

“In an abundance of caution, the captain deemed it necessary to muster all guests to their assembly stations during the incident,” Royal Caribbean said.

Medical staff responded to several calls for assistance, including fainting, reports of high blood pressure and an ankle sprain.

Passenger Andrea Sanders reportedly said she slept on the deck with hundreds of others as smoke billowed out of the ship’s stern.

“I was terrified with it being my first cruise,” she told The Freeport News.

Grandeur of the Seas was cruising from Baltimore to CocoCay in the Bahamas when the fire at the rear of the vessel was discovered. The cause is not yet known.

The line’s president and chief executive Adam Goldstein and a guest care team flew to Freeport assess the damage.

The company said: “The safety of our guests and crew is our top priority, and we will continue to focus on their immediate needs and concerns. Throughout, the ship’s power, propulsion and communications systems functioned uninterrupted.”

The current cruise has been cancelled together with a departure scheduled for Friday (May 31) from Baltimore.

Passengers booked on Friday’s cancelled sailing will receive full refunds and 50% off a future cruise. Air fare costs booked through the line will also be reimbursed.