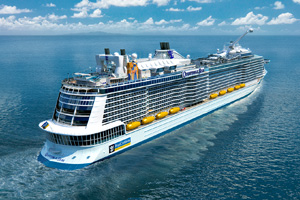 Royal Caribbean International’s new ship Quantum of the Seas is to operate its first cruise from Southampton.

An eight-night transatlantic sailing to Cape Liberty in New Jersey has been scheduled for November 2, 2014.

General booking for the new generation vessel, including a skydiving simulator, is due to open on June 4.

The ship, to be built in Germany, is due to sail via the UK before entering into service on an eight-night cruise to the Bahamas on November 23, 2014 following two short sampler sailings.

No mention of the Southampton sailing is made in information on the ship’s inaugural season to the Bahamas and Caribbean but details appear on a sales flyer detailing cruises through to April 2015.