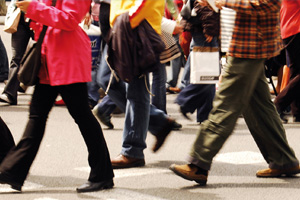 High street shop closures are back in the news, but latest market figures suggest agents need not be among them. Ian Taylor reports

One in five shops “face closure in the next five years”, according to the Daily Mail in a story this week headlined ‘High Street Armageddon’.

The high street is under pressure from falling incomes, rising online sales and economic uncertainty. But the reality is more complex than the headline suggests, certainly as far as travel is concerned.

Media reports were based on a study by the Centre for Retail Research, which warned one-fifth of UK high street shops could close by 2018, and three-fifths of those in Wales and northwest England. This highlights two points worth emphasising: the closures are uneven geographically and the main pressures are economic.

Latest figures from the British Retail Consortium (BRC) show a record number of empty shops, with almost one in eight stores vacant (11.9%). However, BRC figures also revealed the number of shoppers on high streets rose year on year in April by 3.4%. The problem was in shopping centres, where footfall fell 3%.

The BRC said: “Many of the high-profile retail failures have been in shopping malls.”

It refers to “the resilience of high streets” and suggests this is “a function of their diversity, as they have an offer that spans more than just retail”.

Interestingly, the BRC noted “footfall outside usual retail hours demonstrates the strongest performance”, pointing to a 4.9% increase after 6pm.

The BRC also noted April “didn’t benefit from an Easter boost” this year because the holiday began in March. However, travel sellers certainly appear to have seen an April uplift.

Analyst GfK reports summer 2013 bookings up 3% on 2012 in April and total revenue up 11%. Sarah Smalley, GfK managing director for consumer choices, said: “High street agents are responsible for the majority of this growth with 6% more passengers than last year.” Sales of package holidays in the month were 12% up year on year.

The April boom left bookings for the season to date “just down” on last year, but with family bookings up 4% year on year and total revenue up 3%.

The season-to-date figures would be better if not for a dreadful March, which saw summer bookings down 7% on the previous year. Poor March sales coincided with bad weather and an early Easter, and were in contrast to a strong month a year ago. But they nullified a relatively good start to 2013, leaving the season-to-date figure at -2% at the end of March.

February bookings had been flat year on year and January slightly up, with high street agents outperforming the market in both months before suffering a 10% fall in March.

However, it is worth noting prices held up in March despite the drop in sales, with the average income per passenger up 7%. Package sales also held up. It was flight and accommodation-only bookings that showed double-digit declines.

Tui Travel’s most-recent trading update included figures to May 5 showing its UK mainstream summer bookings up 7% – ahead of a 3% rise in capacity – and average price up 5%. So Tui Travel can justifiably claim to be outperforming the market.

However, Thomas Cook reported its UK summer bookings down just 2% in the same period and average selling prices up 4%, off the back of 4% less capacity.

It is reasonable to expect Tui Travel to be ahead of Cook given the recent histories of the pair. The key point is the underlying strength of the market these figures suggest.

The point is borne out by GfK’s analysis of the 2012-13 winter season, which ended with passenger numbers down 8% on 2011-12, broadly in line with capacity but the average sales price close to 5% up. Interestingly, prices in the late winter market appeared to hold up, with average prices in March 11% up on a year ago despite an 11% drop in sales.

Office for National Statistics figures match this picture, showing a 3% fall in holiday departures year on year in the last three months of 2012 and a 1% decline in the first quarter of this year. They also show a 10% drop in outbound business trips in the first quarter, possibly reflecting uncertainty about the economy. Leisure travel has done rather better.