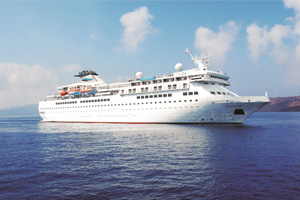 The MV Voyager has terminated its nine day Celtic Treasures sailing after suffering two generator failures while the ship was in port in County Donegal, Ireland.

Voyages of Discovery said the decision to cancel the remainder of the cruise came with “great regret”.

All 487 guests will now be returned to Portsmouth, where the cruise was set to end on Sunday. They are to receive a 60% refund of the cruise fare. They have also been offered a 50% discount on a future cruise onboard MV Voyager.

At 2.45pm and 6.30pm on Tuesday, technical problems occurred leaving two of the ship’s four generators without power while in port in Killybegs.

Specialist engineers were called in but they were unable to solve the problem. Captain Stuart Horner, director of fleet operators for parent company All Leisure Holidays, was flown to the ship to assist.

Voyages of Discovery said: “Passengers are being kept up to date with the progress of these plans, and will travel back to Portsmouth on Friday, May 31.

“Additional excursions are being arranged during the extended stay in Killybegs, County Donegal, Ireland, where MV Voyager has remained since experiencing technical problems on Tuesday, May 28.

“Unusually, two generators ceased working whilst the ship was in port in Killybegs. The ship has a total of four generators and whilst two generators are functioning normally and the ship has power, with all passenger facilities operating as normal, the vessel could not proceed with its cruise.

“A team of specialist engineers joined the ship to try to restore power to the affected generators on Wednesday, May 29.

“Their efforts have unfortunately not been able to rectify the matter in time for the cruise to continue as planned and in the best interests of all passengers and crew, the decision to cancel the remainder of the cruise has been made.

“Voyages of Discovery has apologised to all passengers for these unusual and unforeseen circumstances which have arisen as a result of events beyond their control.”