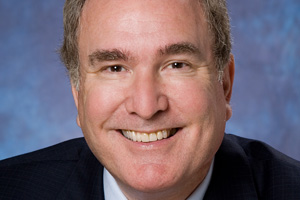 A contract has been signed for the construction of a third Quantum-class ship for Royal Caribbean Cruises for delivery in mid-2016.

The as-yet-unnamed 4,180-passenger vessel will join the Royal Caribbean International fleet, alongside Quantum of the Seas, which will make its maiden voyage in 2014 following a preview in Southampton, and Anthem of the Seas, due to enter service in 2015.

Including Quantum III, the company’s capacity growth rate from 2012 to 2017 will be approximately 4% a year.

Design of the new generation ship includes an advantageous configuration which includes a greater proportion of higher priced cabins and that it achieves some of the greatest energy efficiencies at sea, the line said.

Chairman and chief executive Richard Fain (pictured) said: “We are creating a compelling experience for vacationers with innovative design, winning service, and appealing destinations around the world.”

Royal Caribbean International president and chief executive Adam Goldstein said: “We are encouraged by the very positive response we received from travel agents and consumers when we first announced some of the unprecedented offerings on Quantum Class last month.