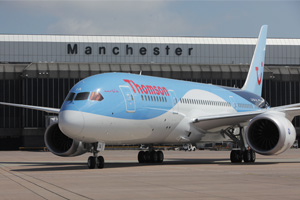 Thomson Airways flew its first Dreamliner into Manchester rather than London Gatwick on Friday as a mark of its support for regional airports.

“We were based in Manchester when we ordered the aircraft.”

Browne hailed Tui Travel’s announcement on the day the Dreamliner arrived of a deal to buy up to 150 of the latest short-haul Boeing 737s as “huge”.

She said: “It’s about confidence in the future. The business is doing so well. It’s great we can invest so much.

“We had to place the order now to get the options on aircraft or we would have to wait. You could not get a 787 now for years.”

Browne described demand to fly on the Dreamliner as “fabulous” despite the delay in delivery. Thomson had been due to start its summer flight programme to Florida and Cancun with the 787 on May 1.

However, the aircraft was grounded worldwide in January following a battery fire and only resumed flying last month.

Browne said: “It’s the first time I’ve ever known people book a holiday because of an aircraft. The summer programme is pretty much sold up. Winter is selling fabulously.”

Thomson will launch 787 flights from Manchester and Glasgow on July 8. But prior to that, “There is a serious amount of training for the crew before we begin flying,” said Browne.

Thomson plans to operate 47 short-haul flights with the 787 between June 21 and the July 8 start of the long-haul programme.”

Browne said: “A lot of people will be very pleasantly surprised.”

She said no customer had registered concern about flying on the Dreamliner. “Customers have been very understanding. They trust Thomson and Boeing not to put an unsafe aircraft in the air.”