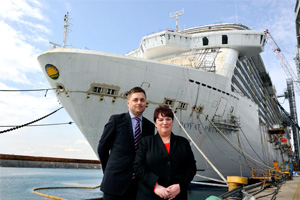 Plans are being laid for the arrival of Princess Cruises’ new ship Royal Princess into Southampton today.

The vessel is due to arrive at around lunchtime ahead of its formal naming by the Duchess of Cambridge next Thursday.

The new-generation 3,600-passenger ship will be welcomed by a special rendition of God Save the Queen as it sails down the Solent.

Royal Princess will arrive at the Ocean Terminal in Southampton for a series of events, including a Clia UK & Ireland agent seminar in conjunction with Travel Weekly on board tomorrow and two mini cruises.

The ship’s inaugural celebrations will conclude with its maiden voyage on June 16.