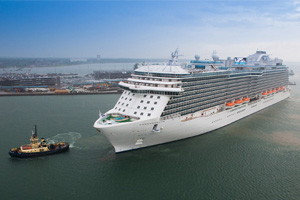 Princess Cruises will welcome 2,500 UK travel agents onboard its newest ship Royal Princess this week, claiming it has never worked harder with the trade.

Having established a first dedicated trade sales team this year, the line has also moved to establish its own distinct commercial identity by simplifying its commission structure to offer a base 10% up front.

Previously it was part of parent Carnival UK’s move to a 5% headline rate although agents were always able to earn more by adding air or selling its group programme.

Princess has also started paying additional fixed-rate payments of up to £50 a booking on certain European sailings, including some ex-UK, this year.

The operator told front-line agents visiting the ship on Saturday that it was continuing to listen to their feedback and planned more improvements to its services including to its Flight Select air booking system and package offering for 2014.

Paul Ludlow, Princess Cruises’ UK managing director, said it was still too early to assess the impact of the tweaks to agency payments but that it expected to see significant impact from this week’s naming.

“At the moment trading is very buoyant; whether that’s because we are working more closer with agents than ever before, whether it’s because the brand has a lot of attention on it I don’t know, but certainly Princess is trading well. Our job is to ensure that momentum continues.

“It’s early days for 2014. We have had a lot of agents wanting to talk to us and with our new sales structure now in place, we want to hear from everybody. For 2013 we have also been introducing some tactical commissions on selected sailings offering bonus fixed amounts.

“We have a lot of people wanting to work with us at the moment – it just feels very positive. We have done a good job this year holding our fares. We have worked in collaboration with agents and this benefits both parties.”

On Thursday the Duchess of Cambridge Kate Middleton will christen the ship in her final public engagement before giving birth.

Speaking to Travel Weekly on Saturday Ludlow said: “It’s going to be an incredible week and it started yesterday with the ship’s arrival in typically British weather.

“What was amazing as it came up the Solent was there were literally thousands of people lining the banks watching the ship come in. That’s an illustration of the excitement that surrounds this ship.

“I have been overwhelmed by the feedback from customers about their personal attachment to the brand, how excited they are about the evolution of our brand. There is a real buzz.”

Ludlow indicated Princess would not seek to overtly use the fact that the ship was named by the Duchess of Cambridge in future marketing.

But he said he believed this would help form a special British attachment to the vessel. “We are really honoured and excited that she is naming the ship. She will fulfil her role as Godmother wonderfully.

“Consumers and agents are always going to draw a correlation between the Duchess and what she has done for the brand.”

As well as 2,500 agents Princess will welcome 7,000 past passengers onboard Royal Princess this week, plus some special guests and partners for Thursday’s naming ceremony and gala event the evening before.