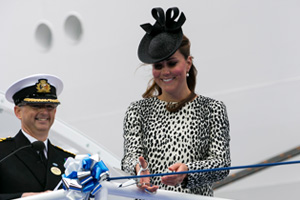 The Duchess of Cambridge named new ship Royal Princess at a ceremony in Southampton today.

The Duchess, who is due to give birth in July, conducted the traditional smashing of the bottle over the liner’s hull. She also boarded the 3,600-passenger ship for a brief tour.

Speaking on the dockside, Alan Buckelew, president of Princess Cruises, said the Duchess represented “style, grace and compassion for others”.

He said: “We are delighted that the duchess will launch our new ship and can think of no better way to celebrate our company’s British heritage and our commitment to the country.”

“We are extremely proud, honoured and excited that she accepted and can’t thank her enough for doing this for us.”

The Royal Princess, which is set to depart Southampton on Sunday, will go on Mediterranean cruises this summer followed by eastern Caribbean cruises beginning in the autumn.