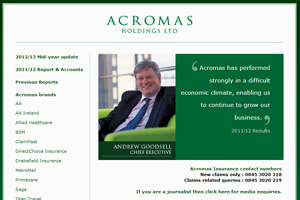 The owner of Saga and the AA confirmed plans to refinance £3 billion of debt in a move that could clear the way for a break-up of the group.

That could allow the group to sell off assets such as the AA roadside recovery business, leaving over-50s holiday firm Saga to float on the stock market.

Saga and the AA were combined in a £6.2 billion deal at the height of the credit boom in 2007 to form Acromas, one of the UK’s largest private equity-owned companies.

The business was funded by £4.8 billion of bank debt. It also runs brands including Titan Travel.

Acromas is owned by private equity firms Charterhouse, CVC and Permira, with staff also holding 20% of the group.

The first tranche of its debt is due to expire in September 2015 and the refinancing will allow it to take advantage of cheaper bond rates by replacing high-interest loans with longer-term debt.

The group has about 18 million customers and employs about 38,000 staff.

An Acromas spokesman said: “We can confirm that we are considering issuing bonds, the net proceeds of which would be used to replace existing bank debt.

“There are no payments to shareholders and no change in ownership of the business. Due to US and other regulatory considerations we are unable to comment further.”