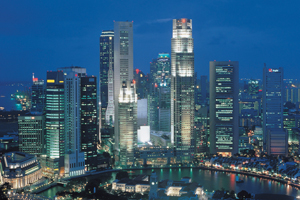 Smog levels in Singapore hit critical levels earlier today, making it potentially life-threatening to the ill and elderly, according to a government monitoring site.

The record level was reached at 11am local time after a rapid rise in the Pollutant Standards Index (PSI), which measures the haze crisis caused by forest fires in Indonesia.

Indonesian and Singaporean officials have been holding emergency talks on how to extinguish the fires on farms and plantations on Sumatra island, which are also affecting Malaysia.

Sustained PSI average levels above 400 on a 24-hour basis “may be life-threatening to ill and elderly persons,” according to Singapore government guidelines.

If the 400 index average is sustained over a 24-hour period, the government advises all children, elderly people and persons with existing diseases to stay indoors, keep windows closed and avoid physical exertion as much as possible, the Daily Telegraph reported.

The Foreign & Commonweath Office said: “Singapore is experiencing high levels of pollution (haze) from land clearance fires in Indonesia. You should monitor the PSI updates and health advisories from the Singapore National environment Agency.”