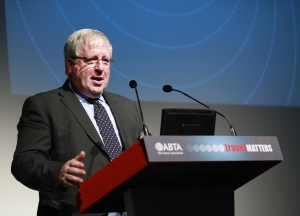 However, the secretary of state suggested a two year wait for the Davies Commission on airport capacity in the southeast to report was “not that long”.

McLoughlin told the travel industry audience: “Britain has neglected transport infrastructure and we are paying a price for that.”

Yet he insisted: “We have world leaders in British Airways, easyJet and Virgin Atlantic. Our airports have been transformed. London is one of the best-connected cities [in the world].

“We should not let the debate on southeast hub capacity distract from that excellence.”

McLoughlin said: “We are clear that aviation is fundamental to the long-term competitiveness of Britain.

“That is why we have asked Sir Howard Davies to chair the independent commission. We hope it delivers the right decision. The commission will report in just over two years, which in the overall context of this issue is not that long.”

He added: “I hope we can get a consensus.”

But asked for government commitment to accept the commission’s findings, the transport secretary said: “I can’t give a blank cheque by saying what any incoming government will do.”

McLoughlin did suggest the commission marks a break from the past.

He said: “When Labour gave a commitment on a third runway [at Heathrow], we opposed it based on information from the 1990s. Now we’ll have new information.”

McLoughlin had earlier recalled his time as a junior minister at the Department for Transport and a conversation about airport capacity with the transport secretary 24 years ago. He said: “Some things remain the same.”

Abta chief executive Mark Tanzer thanked the secretary of state for attending but said: “Progress is glacial. I’m not holding my breath.”