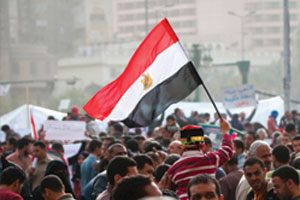 Egypt’s tourism minister is one of five who have reportedly quit from president Mohamed Morsi’s cabinet as anti-government protests spread to cities throughout the country.

State news agency MENA said the ministers were considering resigning in sympathy with the protesters who were calling for the resignation of Morsi.

Tourism minister Hisham Zazou tried to resign last month after Morsi appointed Adel al-Khayat, a member of an Islamist party linked to a massacre of tourists in Luxor, as governor of the city. Khayat later quit.

The official building of the powerful Muslim Brotherhood to which Morsi belongs in Cairo was set on fire before people stormed and looted the building.

The country’s interior ministry said that eight people had been killed in the violence.

The number of people who joined in protests on Sunday was between 14 million and 17 million people, the interior ministry told Al Jazeera.

At least 16 people have been killed and hundreds wounded in clashes between pro and anti-Morsi groups.

The Foreign & Commonwealth Office said that static protests remain in Cairo at Tahrir Square, outside the Presidential Palace at Itihadiya and at the Rabaa Al-Adaweya mosque in Nasr City.

It advised that further large demonstrations are likely at each of these locations last night and in the Mokkatam area of Cairo.