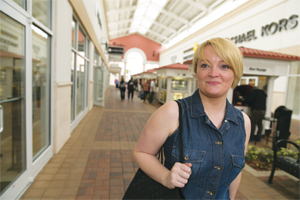 “I didn’t even have a passport,” admitted Kerys, 30, “my first trip abroad was on an educational to Tenerife at the age of 18.”

Twelve years on, she has travelled extensively thanks to regular agent fam trips.

But she had not been to Orlando, the destination for the 2013 Cover Stars trip, and is now the only agent in her shop to have visited the destination.

One of her biggest highlights was before she had even arrived in the US, on the Virgin Atlantic flight. She said: “I had never been on an aircraft where you could go upstairs. I was in premium economy and I just loved walking up and down the stairs.”

Another highlight of the trip for Kerys was to be able to shop until she dropped.

“I didn’t f the prices were so reasonable and I bought loads in the Ralph Lauren shop,” she said.

Resort to have her photo shoot dressed in a 1950s-style polka dot dress, dark glasses and floppy hat, that will always stick in her memory.

“I had to walk through the crowds to get to the photo shoot. Everyone was in their tracksuit bottoms and I was being whistled at,” she recalled.

Kerys’s enjoyment of her moment of fame won’t come as a surprise to colleagues, who entered her in the Cover Stars competition.

“My colleague entered me as she knew I was a bit of a poser! They all tease me about it at work,” she joked.

For Kerys, the pressure to become a Cover Star felt even more intense because colleagues and clients were desperate for her to win.

The shop canvassed votes via its Facebook page and customers, but on the day the list was announced, Kerys assumed she hadn’t won because she had not heard by 4pm.

“I told my colleague it was unlikely I’d won and she was gutted. Part of me wanted to win just for her. I was at the back of the shop when I got the call that I was ‘in’. My colleague was on the edge of her seat and gave the biggest scream ever!”

Regular clients are already getting excited about seeing Kerys’s moment of fame.

“I will have to keep copies of Travel Weekly to show them, and of course we’ll have to put it on our shop’s Facebook page!”