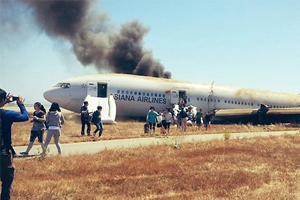 An Asiana Airlines Boeing 777 veered off the runway when landing at San Francisco airport killing at least two people and injuring 182.

The aircraft with 291 passengers and 16 crew was flying in from Seoul when it is reported to have come in too short and hit a sea wall at the airport.

Nationalities on board included 141 Chinese, 77 South Koreans and 61 US citizens, the airline said.

Pictures of the crash at 11.30am local time on Saturday posted on Twitter showed passengers jumping down the inflatable emergency slides and leaving the area, as plumes of smoke rose from the aircraft.

The cause of the crash remains unclear although South Korean transport ministry said “the tail of the Asiana flight hit the runway and the aircraft veered to the left out of the runway”.

Some 190 people walked to safety from the wreckage many of whom were later treated for minor injuries.

A British Airways 777 crash-landed at Heathrow in 2008, missing the perimeter fence by inches before touching down on the grass, leaving one passenger seriously injured and 12 others slightly hurt.

The 777 was “significantly below” its target speed near the runway at San Francisco and the pilot tried to abort the landing, according to the US National Transportation Safety Board.

This came as Asiana confirmed that two female Chinese teenagers out of 307 people on board died in the crash. They had been seated at the back of the aircraft.

NTSB chief Deborah Hersman said the speed of the aircraft speed was below the planned 137 knots (158mph) as it approached the runway.

Citing information both from the cockpit voice recorder and flight data recorder, she said there was a call to increase the speed about two seconds before the impact.

The pilot then requested to abort the landing and “go around”, Hersman added.

“We have to take another look at the raw data and corroborate it with radar and air traffic information to make sure we have a very precise speed.